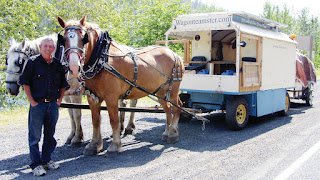 Bob Skelding is traveling with a wagon and a team of horses around the northwest. There starting point was La Garita Creek, CO, and they will end their journey in the southwest before the snow flies.

While most travelers’ thoughts are on the price of fuel these days Bob Skelding of La Garita Creek, CO, and his team of horses, Doc, Bill and Bob, are cruising past the gas pumps. After a day of being on the road these explorers are looking for a cool place to stop and rest that has good grazing and access to water.

Skelding, a nuclear industry consultant, and his team, which consists of two Belgians and a Percheron, will travel 1300 miles in three months, averaging 20 miles per day. This is the fourth trip for Skelding with his horses and wagon and they will travel through 11 western states on this trek.

After a stop near Greer Friday and a visit with local 4-H leader Eileen Rowan about horse pulling he headed to Orofino. Skelding and his horses traveled through the Orofino area Saturday, stopping at a local grocery store for lunch, water and supplies. He anticipated he would be in the Lewiston area Monday.

Skelding’s fourth trip began April 30 from La Garita Creek and he anticipates ending up in the southwest before the snow flies. He carries eight bales of hay and 600 pounds of grain for feeding reserve; however, he stops along the way frequently to let the horses graze and rest Sunday he stopped overnight along the Clearwater River near Lenore. He will cut across southwest Washington to Walla Walla and then head south to California to beat the snow.

Skelding reported that he had a chance about four years ago to decide what was important in his life and to lose some of the “excess baggage” and do something he truly loved.

Skelding, the father of two grown children and grandfather to a two year old grandson, writes on his blog that the sole purpose of his journey is to travel by horse and wagon and meet people. He wants people to share their experiences with him and he enjoys sharing his. He is not supporting any cause or trying to achieve a goal. He does not have any sponsors.

The reason he travels in this fashion is because it combines all the things he likes best and eliminates those he likes least. He writes, “Also, I can’t think of a cooler thing to do.”

Bill and Bob are the two Belgian geldings in the team. They are half brothers, 14 and 15 years old, and weigh about 2000 pounds each and stand about 18 hands high. Doc, the Percheron, was adopted out after Skelding thought he was no longer able to pull, but was later returned to Skelding and is back to enjoying the traveling adventures.

Skelding’s first wagon, with a loaded weight of 7700 lbs., was built from scratch on a running gear. The six ton running gear included bolster springs for a better ride, hydraulic drum brakes on the front and mechanical brakes on the rear. The wagon was 7 ½ feet wide and 16 feet long. The walls were constructed on 2 x 4 frames and sheathed with 3/8” plywood. It had a 75 watt solar panel to help keep a charge on the battery.

This wagon was destroyed Feb. 10, 2009, on a trip from New Hampshire to Mississippi when Skelding and his team were rear-ended by a tanker truck traveling 71 mph. Two of the horses on this team were killed. Skelding spent four months recovering and then set off on a new adventure with a new wagon and a pair of Belgians to pull it.

The new wagon, weighing 3800 pounds loaded, was built on a three ton running gear. It has outside storage boxes and an outside shelf for supplies, a stove, refrigerator, sink, toilet and shower with all the necessary plumbing and electrical. Water is stored in a 20 gallon tank and there is a propane/electric hot water heater with six gallons of hot water storage.

There are two deep cycle marine batteries for electrical storage and an inverter, charger, solar panel and a “shore power” electrical reel. Skelding usually has to plug in every two days to recharge the batteries. The table and seats convert into a full sized bed and the shower is on the front porch with the floor lifting up for the shower tub.

Skelding’s philosophy that he tells people that stop to visit with him is that they should strive for their dreams but also make the best of what they have. Good philosophy for anyone, not just a man with a wagon and a team of horses.

(To read more about Skelding’s adventures go to wagonteamster.com, where he posts blogs and has information on his past travels and adventures.) 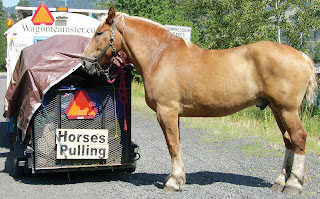 Horses Doc, Bill and Bob took a rest Saturday near the Orofino Bridge before resuming their trip towards Lewiston. Two horses are used to pull the wagon and one is ‘pony-ed’ behind the trailer.

Grazing near “Peach Lane” by Lenore was a little more complicated of a camping spot than Skelding had originally thought it would be. The river bank was too steep to lead the horses to water so the horses were watered from the wagon stores.
Posted by ClearTrib at 12:16 PM