Labrador’s legislation was introduced this week and will set up pilot projects to demonstrate how selected national forest resources might be managed in trust to benefit rural communities.

“This is really promising” said Stan Leach, Clearwater County Commissioner. “Our school and road budgets are stretched to the breaking point and there is absolutely nothing more important than employment opportunities here in Clearwater County. This proposal addresses all of that and will also improve the health of our forests.”

“I am excited to try something besides standing around with our hand out for a Federal check” said Skip Brandt, Idaho County Commissioner. “This builds on the work of our collaborative group that has agreed on the need for more active management of our forests to produce wood products and reduce insect, fire threats, and jobs. We have been looking for a way to do that effectively.” More than 83% of Idaho County is in federal ownership and federal revenues for schools and roads are essential to sustaining those county services.

“This is simply a great idea whose time has come,” said Dan Dinning, Boundary County Commissioner. “We presented it to the Idaho state legislature last session where it was unanimously endorsed by a Joint Memorial. We also presented the concept to Governor Otter and the Idaho Land Board and have received their approval to move forward.”

“This is a very important proposal,” said Jon Cantamessa, former Shoshone County Commissioner. “When given the chance, I am confident forest trusts will work to provide reliable income for our county schools and roads, protect our forest environment, and provide real job opportunities for people in our communities.”

The forest trust concept was first proposed by five Idaho Commissioners, one each from Boundary County (Dan Dinning), Clearwater County (Stan Leach), Idaho County (Skip Brandt), Shoshone County (Jon Cantamessa), and Valley County (Gordon Cruickshank). It was presented to Representative Labrador and the US House Resources Committee in a statement for the Committee Hearing on the Secure Rural Schools Program.

“Since coming into office I have worked with fellow commissioners and organizations throughout the country to improve forest health by using sound management practices and to seek a solution to the funding for rural schools and roads,” said Valley County Commissioner Gordon Cruickshank. “Labrador’s forest trust legislation will allow the Federal Government to meet its obligation by providing a portion of the funding to educate our children and maintain the roads in the rural communities, while providing jobs and protecting our National Forest environment so important to everyone.”

Additional information about the Idaho Community Forest Trust Pilot can be found at: http://sustainableforests-communities.org/our-projects/community-forest-trust-project/
Posted by ClearTrib at 10:25 AM No comments:

The State Board of Land Commissioners (Land Board) March 21 authorized the Clearwater Potlatch Timber Protective Association (C-PTPA) to sign an informal settlement agreement with the Occupational Safety and Health Administration (OSHA) and pay fines in relation to the Steep Corner fire that occurred on the C-PTPA protection area in August 2012. U.S. Forest Service firefighter Anne Veseth was killed by a falling tree on the Steep Corner fire.

The final informal settlement agreement revised and removed several items from the initial OSHA draft citation and reduced fines for C-PTPA from $14,000 to $10,500.

In February 2013 OSHA issued a draft citation to C-PTPA on three items that included the 10 standard firefighting orders and 18 situations that shout “watch out,” working near hazard trees, and the use of personal protective equipment during suppression activities.

The original citation would have required fire managers to remove firefighters from any situation where the hazards outlined in the 10 standard firefighting orders and 18 situations were present. Since the hazards outlined in the 10 standard orders and 18 situations are present on nearly every fire, the original citation could have had a crippling effect on wildland firefighting organizations across the nation, causing fire managers to remove employees from most fires, limiting their ability to engage in swift and early fire suppression and resulting in larger fires that expose firefighters and the public to even more risk.

Representatives of C-PTPA met with OSHA officials to provide clarity to items contained in the original citation. The negotiations resulted in the revision of the original draft citation and the reduction in fines.

“The unfortunate accident on the Steep Corner fire last summer and the subsequent OSHA citation brought to light the need to improve some of our firefighting practices,” C-PTPA Chief Fire Warden Howard Weeks said. “C-PTPA and OSHA share a mutual commitment to provide for firefighter safety. Thankfully, the negotiations with OSHA provided C-PTPA as an employer the opportunity to provide a fact-based rebuttal through an informal settlement process, resulting in an outcome that realistically recognizes the inherent risks of fighting wildland fires and meets both our missions by improving firefighter safety.”

No shortage of laughter in donkey basketball tournament 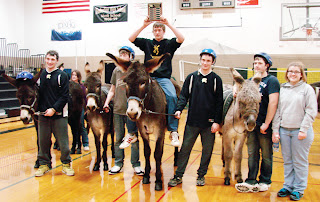 The second annual Donkey Basketball tournament was enjoyed by all who attended. There was no shortage of laughter or fun!

In the first game the Weippe Fire Department team fell to the dominating Clearwater County Sheriff’s Department players. A quick half-time took place and door prizes were given away. The lucky winners were Sheila Barteaux, Zarek Cochrell and Ethan Jared.

Half-time also included a donkey meet and greet where all were welcome onto the floor to get up close and visit with the four-legged players.

In the second game Timberline students and staff went head to head; it was a good game and the students prevailed in the end. The playoff game between the sheriff’s office and Timberline students was definitely captivating! A volley of scoring and a nail-biting tie at the buzzer pushed them into sudden death.

Timberline students pulled it out in the end to be crowned the 2013 Donkey Basketball Champions. The sponsors, Timberline Booster Club, appreciate all who participated and made the event a big hit! 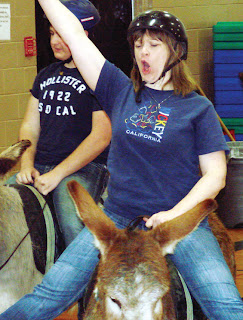 Julie Jared having a yahoo moment. 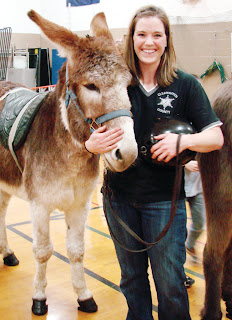 Detective Amanda Barlow with her donkey.
Posted by ClearTrib at 10:17 AM No comments:

The Orofino Maniacs earlier this month were voted the best mascot in Idaho in USA Today’s best mascot contest.

The contest is a national one, with the winning mascot receiving $2,000 for their school sports program.

Regional voting pitted the Maniacs against mascots like the Yuma, Arizona Criminals, the Oregon Episcopal Aardvarks, and the Carbon Dinos of Price, UT.

Originally, regional voting ended March 14, but voting was extended due to concerns that huge amounts of traffic from eager voters may have interfered with the site’s ability to accept votes. After the first round of regional voting, the Maniacs had finished in a distant fourth. The same was true after the extended second round had concluded. The Carbon Dinos took first place.

Visit http://contest. usatodayhss.com/vote/mascot/r6 to see the voting results. The Maniacs are in Region 6. 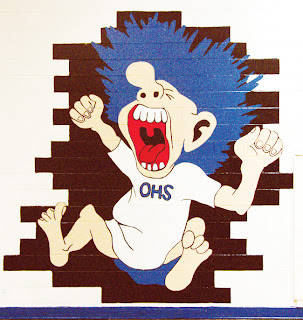 Posted by ClearTrib at 10:10 AM No comments: 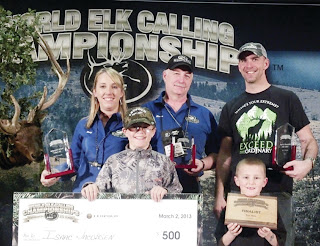 The Rocky Mountain Elk Foundation crowned a series of champions at the 25th annual World Elk Calling Championships in Las Vegas March 1-2, and it was a banner weekend for the Jacobsens, the “First Family” of Elk Calling.

Jacobsen family members took first place in the peewee and women’s divisions, and topped the field in the first-ever Champion of Champions competition, an invitational involving previous winners of the professional division.

This was the 25th year of the World Elk Calling championship by RMEF and they invited all previous winners in the Pro division to compete for the Champion of Champions.

There was a three-way tie between Rockie, Corey and Al Morris. They had a bugle off and there was another tie – between father and son, Rockie and Corey, with Corey being crowned Champion that evening at the grand banquet.

The winners listed below all use Bugling Bull Game Calls.

1. Isaac Jacobsen, 10, Boise. Isaac is the grandson of Rockie and Rena Jacobsen, Kamiah and the son of Corey and Jennifer Jacobsen, Boise. Isaac started competing when he was five years old.

Also competing in the PeeWee division and placing was Sam Jacobsen, Isaac’s six-year-brother.

1. Misty Jacobsen, Monterey, CA. This is Misty’s twelfth win, the most of any contestant.

Several winners in the other divisions use Bugling Bull Game Calls which are manufactured in Kamiah by Rockie and Rena Jacobsen, owners of Rocky Mountain Hunting Calls & Supplies LLC.
Posted by ClearTrib at 9:10 PM No comments:

The sub-basin is located primarily in Clearwater County around Dworshak Reservoir in north central Idaho.

Temperature is a key factor in the health of fish and other coldwater organisms. Recent analyses of water quality data demonstrated that temperatures are above recommended levels in a number of streams in the Lower North Fork Clearwater River Sub-basin due to excess solar loading from a lack of shade.

The recommended actions seek to bring the water bodies into compliance with state water quality standards and restore them to conditions supporting their beneficial uses, which include cold water aquatic life, salmonid spawning, primary and secondary contact recreation, and domestic water supply.

The document is available for review at DEQ’s Lewiston Regional Office and on DEQ’s website (download at right).

March 8, 2013 is a special day in the ICARE, Inc. organization as it marks the fifth full year of helping people in Clearwater River communities who have cancer.

The ICARE Board of Directors Elizabeth Smith, Evelyn Kaide, Lynne Swayne, Barbara Opdahl and Dee Crane are very passionate about the project and are thankful to all who have helped make the past five years such a success.

At times board members have wondered just where the next person/s help would be coming from, but God's timing and blessings of the many supporters (both groups and individuals) have been perfect and always there to meet the needs of the people.

We have learned a lot through the past years and thanks to the help of many, we have been able to grow from a small group helping a small group to an organization that has become a non-profit 501c(3), currently listed in the Combined Federal Campaign (CFC), have helped 95 people in 15 area communities and issued $41,000!

You can be proud of your part in the ICARE project and we hope you continue with us in looking forward to yet more good things to happen in the organization. We are proud to say that every part of your contributions have gone to helping people as they undergo their treatments for cancer.

A mission of the group is to 'never have to turn anyone down due to a lack of funds'. Your role in ICARE has kept that goal alive and as we journey into the future we can all feel blessed to be a part of such a strong organization dedicated to helping our friends, neighbors and families. Congratulations, ICARE, Inc.!
Recent events

In the ongoing efforts to raise funds, ICARE held a Wacky-Tacky Wine Event on Feb. 16 at Big Eddy Lodge on Dworshak and a Chili and Pie Contest and Dance on Feb. 23 at the Kooskia Community Center. Those events brought in $2,031.94.

Live 'Classic Country' music by Beargrass on March 23, at the American Legion Hall in Kamiah. Doors open at 5 p.m.