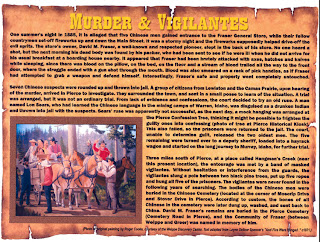 This sign at the Pierce Chinese Hanging Site was pried from its metal backing by a very dedicated thief, as sturdy silicone adhesive was used to attach the sign to its backing.﻿ 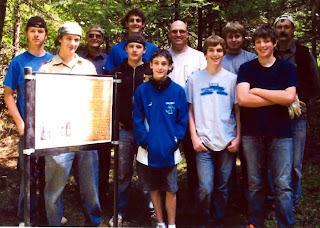 Pictured in June of 2010 are Jonathan Syed and volunteers who helped him complete his Eagle Scout Project. Shown (l to r) are: front row, Front Billy Bob Dana; middle, Jonathan Syed (with sign), Hunter Skiles, Brandon Bishop, and Dalton Chatfield; back row, Charlie Billups, Linden Bishop, Steven Elsbury, Ben Perkins, Sean Perkins, and John Elsbury. Not pictured is Justin Kent
By Andrea Dell
One of the signs at the Pierce Chinese Hanging Site off of Highway 11 has been stolen, and this isn’t the first time. The original sign placed there approximately 30 years ago was attached to a stone marker. Eventually vandals pried it off the marker. In June of last year, Pierce student Jonathan Syed, for his Eagle Scout project, chose to improve the hanging site by placing four brand new signs. On Aug. 9 Jonathan’s mother, Carmen, walked the 365-foot trail to the signs’ location, and discovered that the largest one was gone.
Between the signs’ installation last year and the recent theft, the second of the three smaller signs was damaged by vandals. “It appears someone tried to twist sign two off the post, but was unable,” said Carmen in an e-mail to the Tribune.
She explained that the group of volunteers who placed the signs originally cemented the sign posts and bent the bolts where the brackets attached to the signs' metal backing, to discourage vandalism. In an effort to further lessen the likelihood of theft, silicone adhesive was applied between the signs and their backing.
It is known that the stolen sign was still there in June of this year, according to Deputy Mitch Jared of the Clearwater County Sheriff’s Office.
The Idaho Transportation Department established a historic marker on Highway 11 near where five Chinese men were hanged in 1885. They had been accused of killing a Pierce merchant, D.M. Fraser, and were being transported to to stand trial. Three miles outside of Pierce, vigilantes intercepted the transport and hanged the men.
The exact location of the hanging is unknown, but ITD established a memorial site in the approximate area, with a stone marker covered with an interpretive sign, at the end of the trail leading to the site. Even after the original sign was stolen, the stone marker remained.
Potlatch Corporation approved Jonathan’s Eagle Scout project, and the ITD Historic Byway program provided a grant to pay for the work. After months of research and planning, Jonathan and several volunteers gathered to clear the trail and install the four new signs along the path.
The first three detail a portion of historical events leading up to D.M. Fraser's murder. The fourth and largest sign, located at the site itself, describes the hanging incident.
Signs of Orofino produced the new signs, and local residents John Bergen, Bill Maki, and Wayne Thornton, along with several other volunteers, pitched in to help Jonathan complete the project.
One of ITD’s stipulations for allowing the project was that the original stone marker not be disturbed, meaning the new signs would have to be placed elsewhere.
Persons who may know something about the incident are invited to phone Deputy Jared at the sheriff’s office at . If you visited the trail anytime between June and Aug. 9 of this year and noticed whether or not the sign was present, Deputy Jared would appreciate hearing from you.
Posted by ClearTrib at 1:26 PM